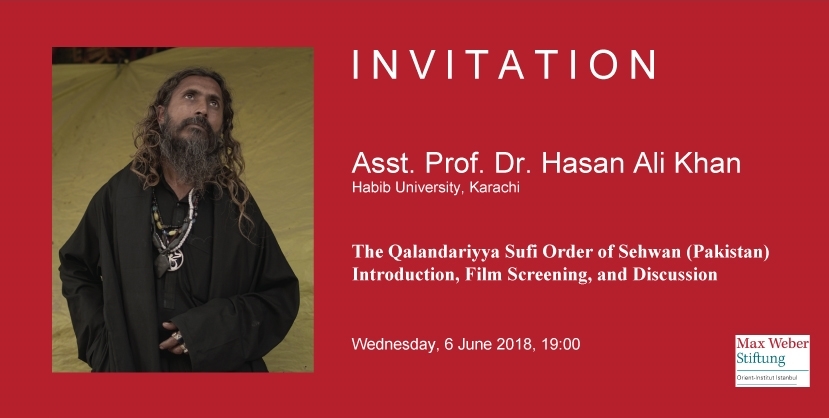 The ethnographic film ‘Shahbaz Qalandar’ explores the vital role the Qalandariyya Sufi Order plays in the religious life of the city of Sehwan Sharif, the last remaining centre of Qalandariyya dervishes world-wide. Shabbir Siraj, Nofil Naqvi and Hasan Ali Khan, conceptualized the film together. Ali Khan’s work on the Qalandariyya, in the city of Sehwan in Pakistan, includes the popular rituals observed at the shrine, notably the dhammal, but also include other aspects of the order’s piety and ceremonial culture. The screening of the film will be preceded by a short talk on the structural commonalties the Qalandariyya Sufi order shares with similar communities in Turkey and Iran, such as the Alevis and Ahl-i Haqq (Yaresan).

Dr. Hasan Ali Khan is an Asst. Professor at the School of Arts, Humanities, and Social Sciences (AHSS), Habib University, Karachi. His PhD, SOAS, University of London, 2009, is on the medieval Suhrawardi Sufi Order and its related architecture in Multan and Uch. His bachelor’s degree is in architecture from METU, Ankara (1996). During his professional career, he has taught at the Aga Khan University, Karachi, and the Indus Valley School of Art and Architecture. He has worked extensively on the Hindu community in Tharparker (Pakistan), and the Rifa’i Sufi Order in southern Baluchistan. Additionally, he has worked with the French Interdisciplinary Mission and Centre for South Asian Studies (CNRS-EHESS) on the history and culture of Sehwan Sharif.