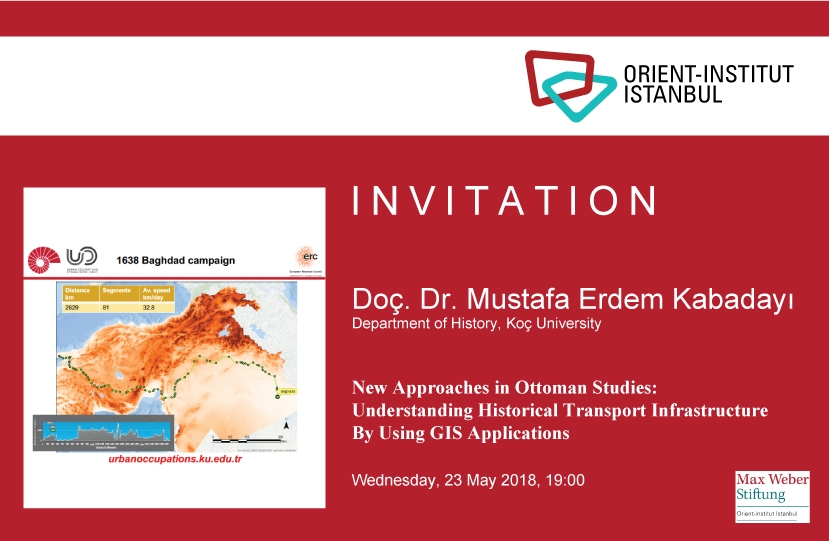 Doç. Dr. Kabadayı’s talk explores the planning and implementation of military campaigns from a geo-spatial perspective; the establishment and expansion of the postal service (menzil); and, the journey itineraries of Ottoman civil servants covering the long period from mid-sixteenth to mid-nineteenth century. The logbooks of four Ottoman military campaigns (Köszeg 1532, Suceava 1538, Yerevan 1635, & Baghdad 1638) contain detailed information on the routes, stops, and travel distances in time between stops. The data on the Ottoman campaigns are further examined in juxtaposition to the network of horse-riding postal services in the seventeenth and eighteenth centuries, and, finally, with the detailed mid-nineteenth century civil servants’ journey itineraries. The entire examination will be supported by a terrain analysis, based upon a digital elevation model derived from the 30-meter spatial resolution Shuttle Radar Topography Mission data. After obtaining his BSc from Middle East Technical University in Ankara) and an MSc in Economics (University of Vienna), Dr. M. Erdem Kabadayı earned his PhD from the University of Munich in 2008. Until 2005, Kabadayı has mainly worked on economic, financial and labour history of the Ottoman Empire. Since October 2016, he is the principle investigator of the UrbanOccupationsOETR (urbanoccupations.edu.tr), an ERC Starting Grant Research Project centered at Koç University. Currently, he is pursuing his academic career further as an economic historian specialising on the Ottoman Empire with a particular focus on Bulgaria, Greece, and Turkey.