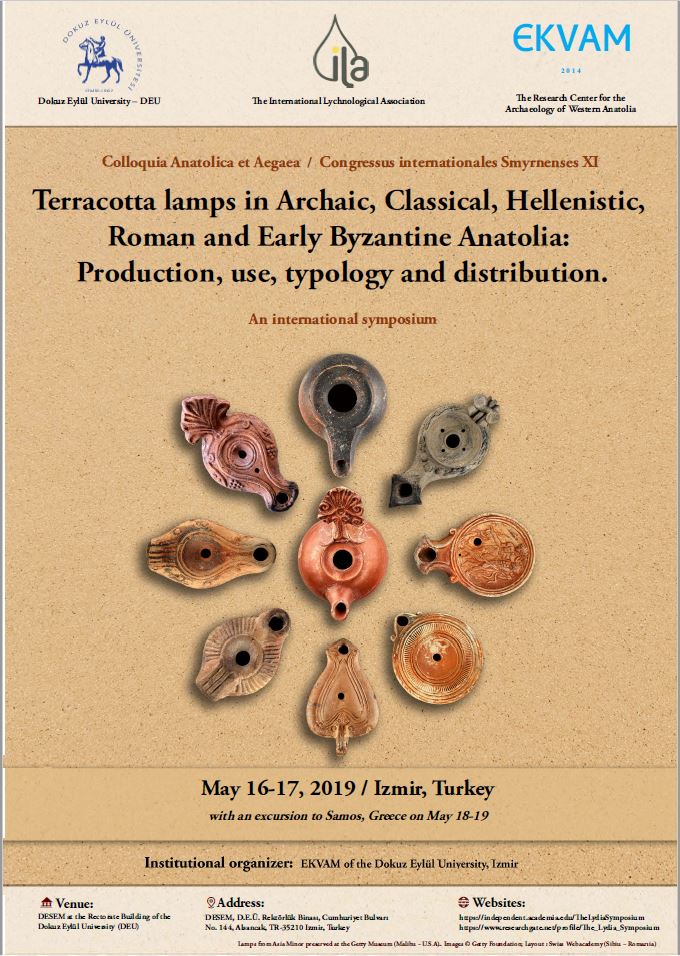 The Izmir Center of the Archaeology of Western Anatolia (EKVAM) is glad to inform you that an international symposium on oil lamps in the Archaic, Classical, Hellenistic, Roman and early Byzantine Anatolia, will take place on May 16-17, 2019 at the Dokuz Eylül University (DEU) in Izmir, Turkey.

Ancient oil lamps, especially produced by clay, were found in relatively large quantities in entire Anatolia, where they were produced between the Bronze Age and Medieval periods. So far the study of this implement has been overlooked in Anatolia whereas there is still a huge amount of unpublished material from excavations, field surveys and museums in Turkey. Ancient Anatolian oil lamps can be categorized based on different criteria, including material (terracotta, bronze, glass, lead and stone etc.), production (wheel-made or mould-made), typology, fabric, decoration, production, use and distribution. During the Archaic and Classical periods (i.e. seventh to mid-fourth century B.C.) handleless, round, wheel-made terracotta oil lamps were produced locally especially in the western Anatolia or imported in large scale. During the Hellenistic and Roman periods Anatolian lamps were produced more frequently as mould-made and typologically they have numerous varieties. In these periods oil lamps were utilised for profane and religious purposes, especially as tomb votives. During the mid-sixth/early seventh century A.D. the form of lamps was changed in Anatolia radically. In recent years some chemical analyses done within these objects yielded several results for the oil sorts used in these instruments.

We would be delighted, if you could consider contributing to our symposium and contact us with the required information below before January 1, 2019. Our e-mail addresses are: gulserenkan@hotmail.com or terracottas@deu.edu.tr We would be thankful, if you send us your abstract and required information only in word doc. For all your queries concerning the symposium our phone number is: +90.544.938 54 64.

The organizers seek to widen participation at this symposium, and would like to encourage colleagues from all parts of the world to attend. The symposium committee kindly requests that you alert any persons within your research community who would be interested in participating at this symposium, either by forwarding our e-mail through Facebook or other similar social media, or by printing this circular or our poster and displaying it in your institution.

We hope that you will be able to join us at the Dokuz Eylül University, and look forward to seeing you in Izmir!