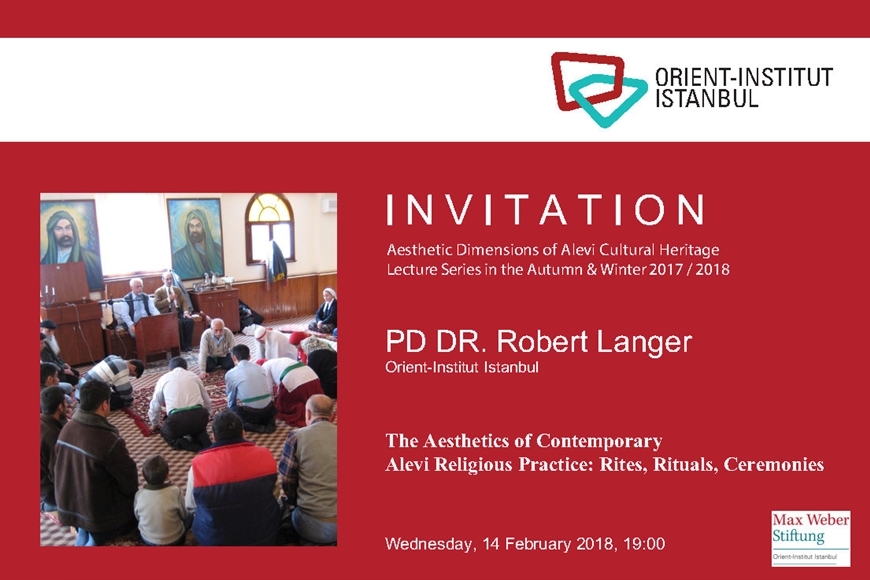 Alevi ritual practice is a significant means in (re)producing a specific Alevi habitus and cultural identity. It is well known that the cem ritual and the emblematic semah were formative in the so-called Alevi revival. Representations of such performances became core symbols for ‘Aleviness’. Despite this, Alevis often complain that the contemporary Alevi ritual is no longer ‘authentic’. However, contemporary rituals and ceremonies still preserve rites and ritual elements constitutive for the Alevi tradition. By drawing on a large body of audio-visual material collected 2003-2010, this lecture will present examples from a systematic analysis of the repertoire and structures of transnational ritual practice, focussing on its aesthetics.

Robert Langer holds an M.A. (Islamic Studies, Cultural Anthropology) and a PhD, both from the University of Heidelberg, where he was appointed ‘Privatdozent’ with a venia legendi for ‘Islamwissenschaft’ in 2016. Since October 2017, he is senior researcher at the Orient-Institut Istanbul, responsible for the research area ‘History of Religions’. He conducted fieldwork in Iran, Turkey, Armenia, and Germany among Zoroastrians, Alevis, Yezidis, and Twelver Shiites, both as member of the Collaborative Research Centre ‘Dynamics of Ritual’ (Univ. of Heidelberg) and as research group leader at the Dept. for the Study of Religions (Univ. of Bayreuth).