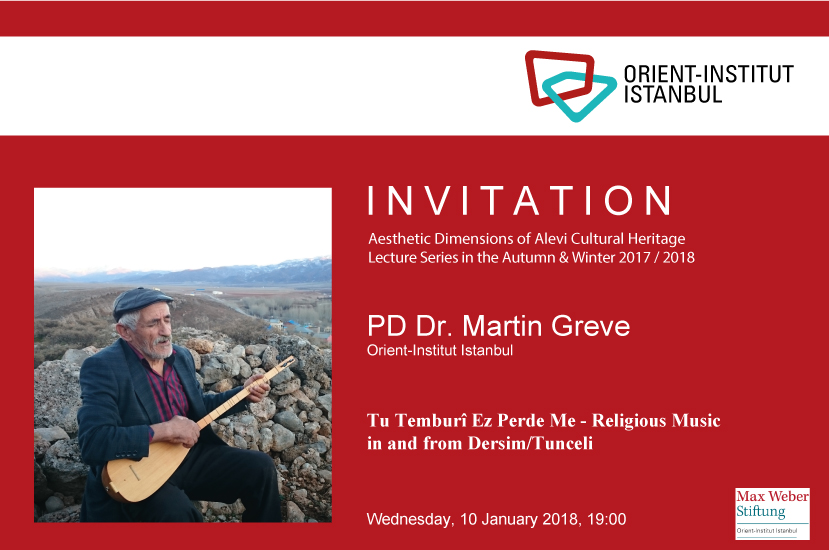 With a large part of Alevi traditions intoday’s Dersim/Tunceli hardly being practiced anymore, most contemporary singers of the region are deeply influenced by the beliefs and aesthetics of the “path of god”. This talk aims to briefly describe former rituals, their (musical) actors, such as pirs/dedes, dervishes and koceks, together with the wide range of musical expressions connected to Alevism in Dersim until the1970s. Several pirs, such as Sey Qaji, Firik Dede, Hozatlı Ahmet Dede, or, Zeynel Dede, gained local fame as poets and singers. Recent transformations of this music will also be discussed together with the standardization ofreligious practices as well as the secularization and aestheticization of music.

Martin Greve is a German ethnomusicologist with a focus on music in Turkey. From 2005 – 2011 he was the coordinator of the Study Program of Turkish Music at the Rotterdam World Music Academy. From 2007– 2011 he served as advisor to the Berlin Philharmonic concert hall for the concert sequence “Alla Turca.” Since May 2011, Martin Greve has been a research associate at the Orient-Institut Istanbul. In 2017, his monograph “Makamsız. Individualization of Traditional Music on the Eve of Kemalist Turkey” was published. His latest book “Yeni Dersim Soundunun Oluşumu: Anlatılamazı İfade Etmek” (Expressing the Unspeakable: The Emergence of the New Sound of Dersim), coauthored with Özay Şahin, will be published in early 2018.