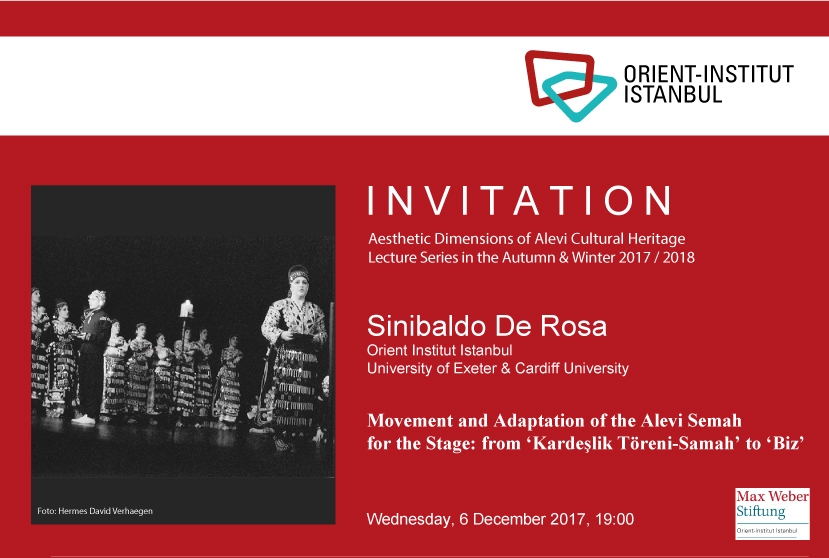 Movement and Adaptation of the Alevi Semah for the Stage: from ‘Kardeşlik Töreni-Samah’ to ‘Biz’ / Sinibaldo de Rosa

Over the last decades, the performing arts played a crucial role in the implementation of Alevi visibility in Turkey as well as abroad. Whereas music and sound played a major role in this developments,dance and movement have also been crucial avenues through which Alevi aesthetics became accessible to a larger public. In this lecture, Sinibaldo DeRosa will discuss two dramatic experimental works into which the semah-s, as classic archetype of Alevi liturgies and ethics, were adapted and re-invented beyondthe ayin-i cem ritual setting and folkloric presentation. The first of these works, with the title “Kardeşlik Töreni-Samah”, was performed since the 80s bythe amateur theatre group Ankara Deneme Sahnesi under the direction of the late professor Nurhan Karadağ; the second, “Biz” (2014) by the Istanbul-based choreographer and scholar Bedirhan Dehmen, is a more recent and intimate intermingling of semah structures with contemporary music and dance vocabularies. Looking at these productions and at the artistic and social processes that encompass them, the lecture interrogates the situational and embodied dynamics at play in the transmission of Alevi cultural heritage.

Sinibaldo De Rosa is a PhD candidate working with the South West and Wales Doctoral Training Partnership (SWW DTP) between the University of Exeter (Drama) and Cardiff University (Music), and currently a grantee at the Orient Institut Istanbul. He completed a diploma in the Kinetography Laban from the CNSMDP (2015), a Research Master’s in Turkish Studies from Leiden University (2013) and BA in Cultural Anthropology from the University of Bologna (2007). In the past, he also studied Sociology at Marmara University (2006) and Social Anthropology at METU (2010-2011).