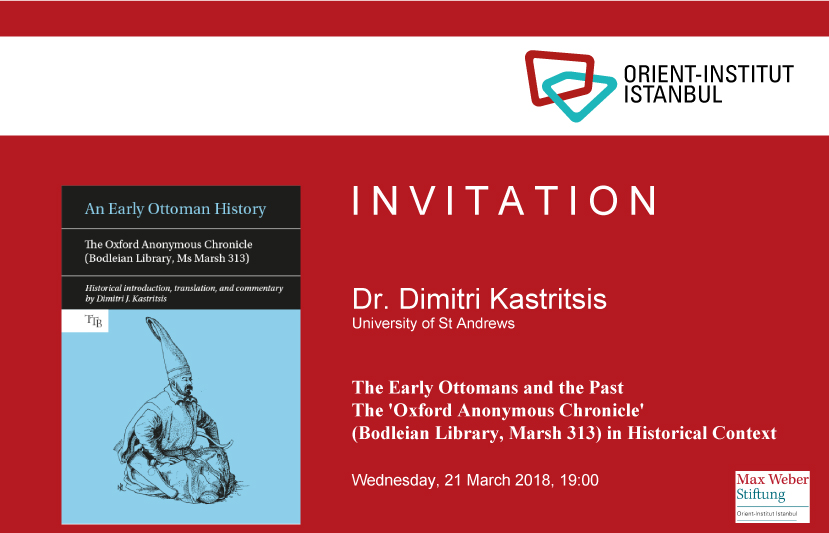 The Early Ottomans and the Past. The 'Oxford Anonymous Chronicle' (Bodleian Library, Marsh 313) in Historical Context / Dimitri Kastritsis

The so-called ‘Oxford Anonymous chronicle’ is a comprehensive history of the Ottoman dynasty in Turkish, compiled from various sources to tell the story of the dynasty from its rise to the year 1484 (AH 889). Like several other histories produced around the same time, some of which it influenced, it presents the Ottomans in the context of wider Islamic history and contains a coherent argument for their superiority over other dynasties. The manuscript had previously belonged to the Dutch orientalist Jacob Golius (d. 1667), and was probably a presentation copy made for Sultan Bayezid II (r. 1481–1512). The work itself is a product of Bayezid’s patronage, and shows a strong preoccupation with the perennial Ottoman problem of dynastic succession. In this talk, Dimitri Kastritsis will present his recently published translation and study of the history in question, along with some more general thoughts about early Ottoman views of the past, both real and imagined.Dr. Dimitri Kastritsis is Lecturer in Ottoman History at the University of St Andrews in Scotland. His previous publications include The Sons of Bayezid and two studies of the Alexander Romance in the fifteenth century. He is currently working on a synthetic study of early Ottoman political and intellectual culture.